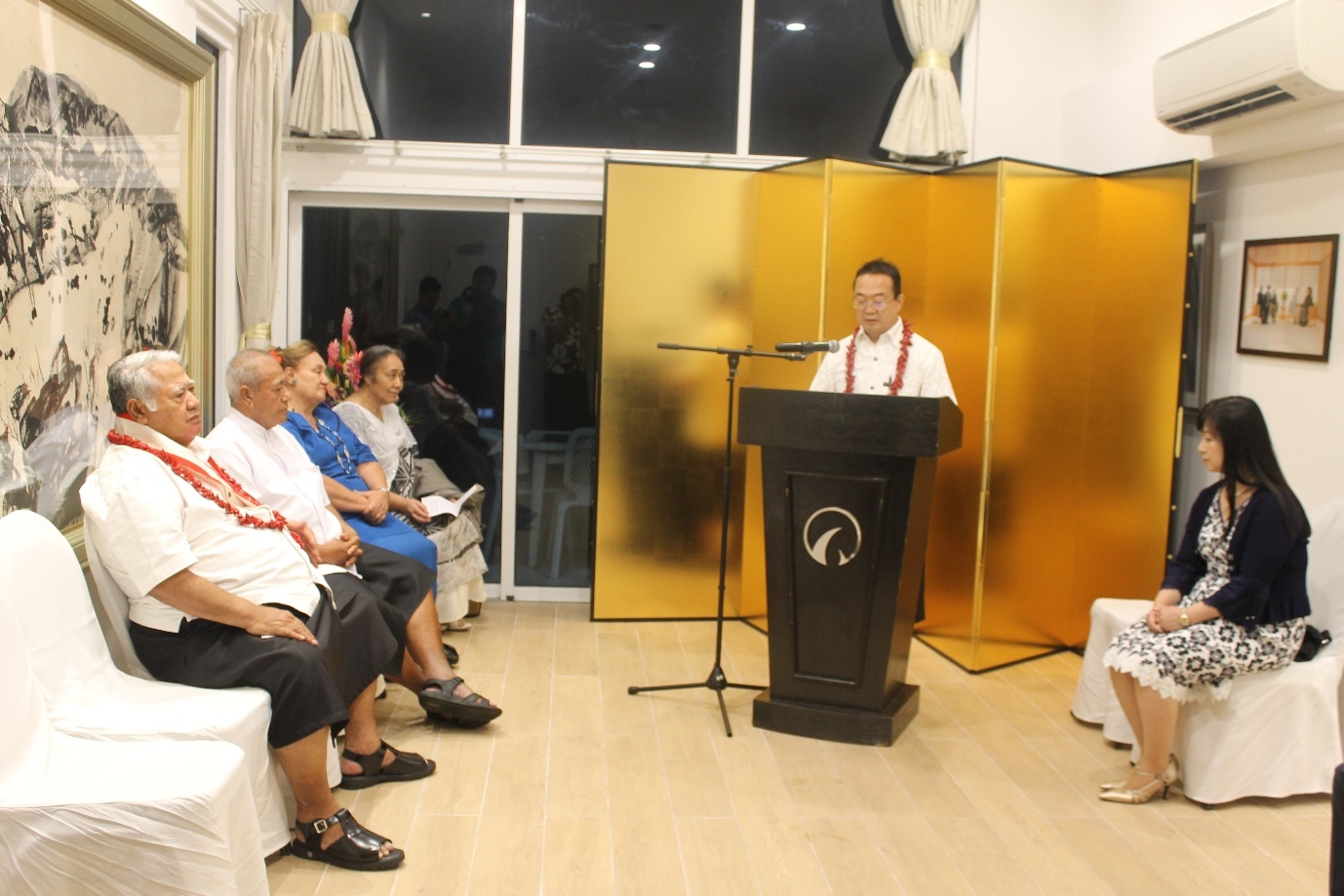 1. The Official Residence of the Ambassador of Japan was opened on 22 August 2019 within the Taumeasina Island Resort and the Hon. Prime Minister, Tuilaepa Fatialofa Lupesoliai Sailele Malielegaoi was invited over as the first guest. The host of the Residence, H.E. Maugaoleatuolo Shinya Aoki, the Ambassador Extraordinary and Plenipotentiary of Japan to the Independent State of Samoa stated, while welcomed the Prime Minister, that he established the facility in order to promote face-to-face communication with Samoan officials and others, and he is happy to provide more opportunities for them to feel Japanese cuisine and culture.
It is also the first occasion for Mr. Rikio Moto, a Japanese chef, who arrived in Samoa recently to work exclusively for the Ambassador at the Residence. Mr. MoTo said that expressing Japanese tradition in cuisine by using local ingredients is what he has dreamt of. He believes that his work becomes a bridge between the two countries and it is his pleasure to do so while working at the Residence.

2. Taking this occasion, Ambassador Aoki, unveiled the Decoration of Japan conferred upon the Hon. Prime Minister. He received the Grand Cordon of the Order of the Rising Sun (See below), the highest Order of Japan to non-Japanese nationals. The Hon. Prime Minister was awarded the honor during his official visit in Japan in 2018. It was awarded in the name of His Majesty the Emperor Akihito (currently Emperor Emeritus) due to the Prime Minister’s outstanding contribution to strengthening the bilateral ties and promoting friendship between the two countries which includes:
(1) to establish the Embassy of Samoa in Tokyo in 2009 that makes ties between the two counties stronger and smoother thus intensifying cultural, economic and people’s exchange to a greater extent;
(2) to promote people-to-people exchange resulting in establishing the Japanese language major at the National University of Samoa and facilitating relationships between Samoa and Japan’s local municipalities, Iwaki and Yamagata and Okinawa Prefecture; and
(3) to foster deeper relationships between Japan and Pacific counties through its leading role in the Pacific Island Leaders Meeting (PALM) as the only national leader who has attended all meetings since the foundation in 1997. Ambassador Aoki expressed his pleasure that he could finally introduce the Prime Minister’s meritorious deed for friendship of the two countries to the people of Samoa.