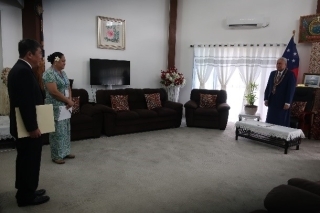 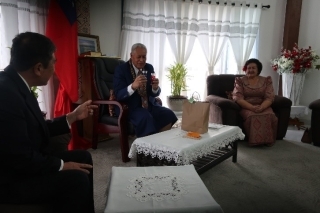 Ambassador presented a ceremonial gift during the ceremony
Ambassador Extraordinary and Plenipotentiary of Japan to Samoa, H.E. Mr. SENTA Keisuke presented his credentials to Afioga i le Ao ole Malo, Tuimaleali’ifano Va’aletoa Sualauvi II, Head of State of the Independent State of Samoa, at his Official Residence in Vailele on February 15, 2022.

In his statement before the Head of State, Ambassador SENTA conveyed the message of His Majesty the Emperor of Japan, to maintain and promote the relations of sincere friendship and good accord between Japan and the Independent State of Samoa. Ambassador also recalled that Samoa and Japan have enjoyed a firm and excellent friendship since the establishment of diplomatic relations in 1973 and reaffirmed that the Government and people of Japan attach great importance to further strengthening the relationship with Samoa for peace, stability and prosperity for both countries as well as in the Asia-Pacific region and the world. Furthermore, he ensured that he will make all his efforts to promote the friendship and expand the scope of the cooperation between the two countries.
After the presentation of his credentials, Ambassador presented a ceremonial gift to the Head of State, a traditional cut glass product (Satsuma Kiriko) of Kagoshima as a token of friendship between the two countries. Kagoshima is Ambassador’s home town. Traditionally Kagoshima region was called Satsuma（薩摩）, which shares the same Chinese characters with Samoa written in Chinese characters (薩摩亜).