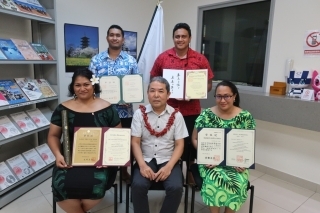 Four Samoan students who studied in Japan under the Japanese Government (MEXT) Scholarship, have safely returned to the country on the repatriation flight on 2 October 2020, after completing their studies in Japan in March 2020 and remained there due to the closure of international borders.

These four scholars called at the Embassy of Japan, met with the Counsellor and Deputy Head of Mission of the Embassy of Japan in Samoa Mr. Isao Kishi on Thursday 26 November 2020, and presented their graduating certificates: The scholars also shared their experiences while they were studying and living in Japan for the past three to five years. The scholars shared that they would utilise their learning experiences and achievement to contribute to the development of Samoa as well as to strengthen the ties between Japan and Samoa. They all expressed their grateful and heartfelt appreciation to the Government of Japan for giving such opportunities for them to realise their academic purposes.
They are all glad to be back home, and at the same time missing Japan and its beautiful environment.