Top > Handover Ceremony for the Project for Construction of Recycling Facility of Samoa Recycling and Waste Management Association (November 24, 2021)

Handover Ceremony for the Project for Construction of Recycling Facility of Samoa Recycling and Waste Management Association (November 24, 2021) 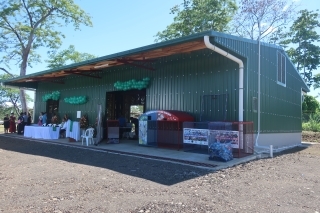 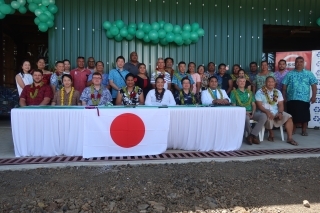 At the ceremony
The SRWMA officially opened its recycling facility with the majority of funding provided by Japan.

An opening ceremony for a new recycling facility was held on 24 November at the Samoa Recycling and Waste Management Association (SRWMA). Present at the ceremony and on behalf of the Embassy of Japan in Apia was Counsellor/Deputy Head of Mission, Mr. TSUKADA Kazuo, CEO of the Ministry of Natural Resources and Environment, Ms. Frances Brown-Reupena, stakeholders and members of the diplomatic corps.

Since March of this year, a grant of up to USD 190,123 (about WST477, 097) was provided to the association under Japan’s Grant Assistance for Grass-Roots Human Security Projects (GGP) to construct the new facility that will be utilized for glass and plastic recycling and storing of its material.

Japan emphasizes the importance of the 3R (Reduce, Reuse and Recycle) principle in the context of sustainable ocean and pledged its contribution under the Pacific Bond (KIZUNA) policy agreed with the Pacific Island Countries at the occasion of the Ninth Pacific Island Leaders Meeting (PALM9).

Japan’s assistance is a part of joint efforts with the U.S., UK and the UNDP to promote recycling activities of the Association. The project is implemented in collaboration with technical expertise provided by J-PRISM II project, co-implemented by JICA and SPREP is a clear manifestation of Japan’s genuine commitment and contribution to promote waste collection and management activities.