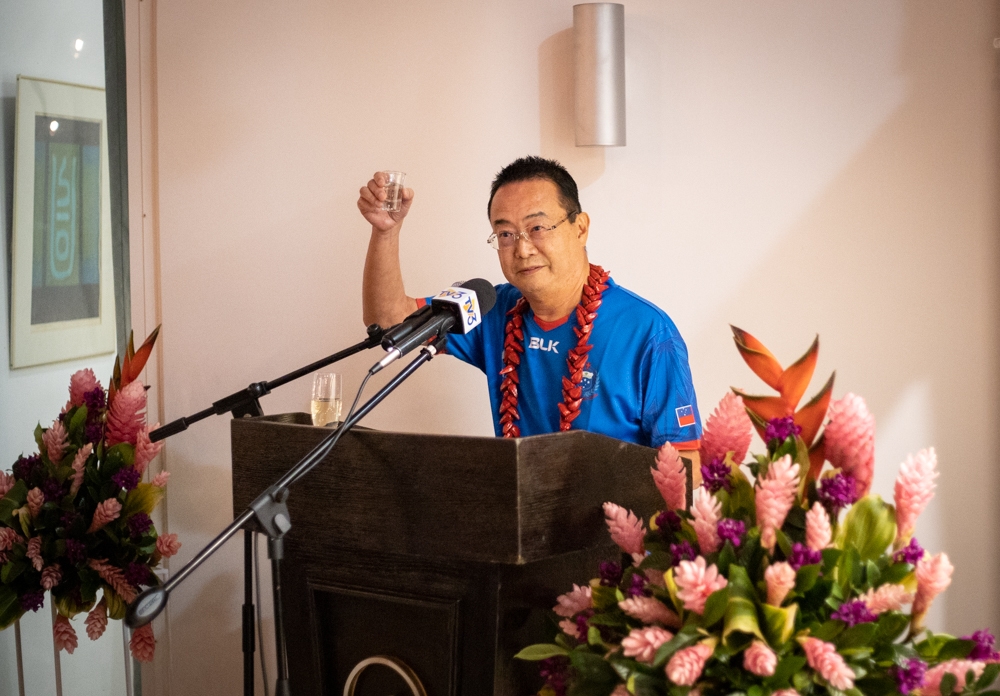 Photo: Samoa Observer
H.E. Maugaoleatuolo Shinya Aoki, Ambassador Extraordinary and Plenipotentiary of Japan to Samoa, received some of the Samoa Rugby Union (SRU) board members as well as government officials on behalf of the Manu Samoa on the night of 3 September 2019 for a Reception marking their upcoming trip to the 2019 Rugby World Cup in Japan. Among the guests present and welcomed into his Residence were Hon. Afamasaga Lepuiai Rico Tupai, the Minister of Communication, Information and Technology, the President and the Chief Executive Officer of the SRU.
At the Reception, H.E. Ambassador Aoki highlighted how rugby has brought Samoa and Japan closer. Both Japan and Samoa has a long history of rugby and both certainly have benefitted from its development. He explained this development has boosted the long-standing positive relations between the people of the two countries. And such relations have contributed into the firm partnership that is currently developing between Japan and Samoa. He assured that the Manu Samoa will have a great experience in Japan and will come into contact with both the history and modernity of Japan. But at the same time Ambassador advised that the team would act as Samoan Ambassadors to Japan. He hopes that both the Manu Samoa and the Cherry Blossoms, Japan’s national team, will win the Pool games and advance to the Quarter Final and have a shot at the Finals Round. In this connection, he reminded his guests of what had happened at the last World Cup where the Cherry Blossoms defeated the two-time world champion South Africa. With his words of encouragement “Fortune favours the brave” after witnessing the Manu’s greatest siva tau at their first warm-up match in the Pacific Nations Cup against Tonga, he wished the Manu Samoa the best of luck on their journey.
The Manu Samoa and the Cherry Blossoms are both in Pool A of this year’s tournament alongside Scotland, Ireland and Russia. Both teams are scheduled to play off on 5 October 2019 at the Toyota City, Japan. With fifteen matches contested between the two teams, the Manu Samoa has won over eleven matches with its current rankings at the sixteenth place while Japan at the tenth place.